From Visitation To Habitation

There had not been a prophet in Israel for more than 400 years. Now, in the spirit and power of Elijah, John the Baptist stood in the Judean wilderness. Lightning flashed from his eyes as his message thundered across the terrain of human souls before him. The storm of God had returned!

Historians tell us that John's penetrating ministry brought nearly one million people to a baptism of repentance. It was an unprecedented beginning to a time of visitation. It was into this electrified atmosphere of awakened faith that Jesus came, bringing miracles previously unseen in Israel's history. The presence of the living God was flowing through Christ; His message was unparalleled: the kingdom of heaven was at hand!

Yet, for all the multitudes, miracles, signs and wonders, incredibly, Jesus lamented over the nation. He wept because, according to His view, they failed to "recognize the time of [their] visitation" (Luke 19:44).

In what way did they miss this move of God? Certainly, vast multitudes responded to John's call for repentance. Clearly, people were in awe of the supernatural: the incurable had been cured and demoniacs delivered! And, what of the multitudes that followed Jesus into the wilderness whom He fed the loaves and fishes – didn't they recognize the uniqueness of this hour?

Obviously, the crowds were very familiar with the healing, miraculous dimensions of a visitation (see Luke 4:14-19; Isaiah 61:1-2). Yet, when God comes in visitation He is seeking two unfolding realities: to destroy the works of the devil and then build His kingdom into the lives of the newly healed. He does not come to heal us so we can drift back into our old lives. He heals us so He can transform us into His image. Indeed, the very captives He sets at liberty He then empowers to “rebuild the ancient ruins... raise up the former devastations and... repair the ruined cities” (Isaiah 61:4).

To ignore or minimize this transformational goal is serious. When we are given much, much is required. You see, the word visitation not only means a time of healing; it also refers to a time of inspection, of being examined closely. God not only participates in the joy of our deliverance, He is also examining us to see if we will now respond in increasing obedience.

Our obedience actually creates a different future for us, one that is blessed. Yet, if we do not respond, there are calamities awaiting also. He tells the newly healed to “not sin anymore” lest something worse happen (John 5:14). To the delivered He warns that, if their soul remains unoccupied after having their inner lives cleansed and put in order, the “last state of that man becomes worse than the first” (Matt. 12:45).

You see, at the very moment God removes our burdens, He is also removing our excuses. Having now been freed from oppression, the Lord expects that we will put aside our differences, reconcile and unite as a heavenly community, and begin to transform our world.

A New Season of Outpouring

Over the past years, the Lord has raised up an international armada of intercessory ministries. As a result of the prayer movement, especially TheCall and other solemn assemblies, the beginnings of a visitation are emerging. Reports are coming almost weekly of supernatural manifestations and revival. Many feel we are close to a spiritual awakening.

Yet, while my heart swells with joy, I also fear. For when we cry for a holy visitation, we are crying for God’s kingdom – the very reign of God to be done on earth as it is in heaven. My concern is, when we entreat the Almighty for His kingdom, are we truly ready to surrender ours?

Most in first century Israel did not understand the goal of a visitation; they were blessed, touched and healed, but they did not attain God’s purpose, and for them Jesus wept. Nevertheless, on Pentecost Christ's disciples did, in fact, carry the visitation to its appointed purpose: the early church became the dwelling of God on earth. The citywide church was united, committed to prayer and focused on Jesus (see Acts 3:1). Miracles were ordinary, as was extravagant giving to the poor. The early church set the standard for visitation: signs, miracles and conversions, but also Christ-centered unity among church leaders and believers alike.

If there is no functional, Christ-centered unity among the churches in your city, then lets begin by praying for the leaders. Yes, let us rejoice in the beginnings of revival. But, with sobriety, let us also keep in mind that the goal of a visitation from God is that we become the habitation of God. 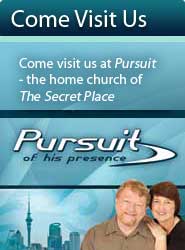