The Motivation Of The Bridal Heart

God intimately understands the human heart, which He formed. He knows perfectly how to motivate His people toward holiness. In Jeremiah 3:14, the Lord says, "Return, O backsliding children, for I am married to you." This very revelation is the highest and most effective motivator for calling people to abandon all else for Him. Great desire for human beings is the secret weapon in God's arsenal. The power of this revelation when we grab onto it is simply unmatched by any other revelation in the universe. It's not built on shame or fear but strong desire. He says in essence, "Turn to Me because I am married to you and because I desire you." He is not negating all of the other types of biblical motivation, but making it clear what the superior motivation is. This will become the single most important impulse toward holiness in the final hour of natural history as the Lord raises up a bride with a heart after God's.

The secondary forms of motivation are valid. Hell is a true reality. And we experience real loss in our spiritual lives and in the fullness of our earthly ministry by not fully responding to the Holy Spirit during revival. And shame and embarrassment lead to genuine pain when sin is exposed. All these arguments have their place. There is a time to warn people of hell or to warn them that they may lose out and be disqualified in terms of their earthly mandate and ministry. There is a time to exhort people to leave their ungodly ways because of the public and private humiliation they will taste if they don't. Yet the primary and most effective method is the way that the Lord Himself spoke through the prophet Jeremiah, "Turn because I am married to you. My heart burns with desire and longing for intimate fellowship with you. I yearn for close relationship and encounter between My heart and your heart." With this invitation, the Lord beckons us to do away with compromise and leave our backsliding because He wants us and desires us. The Lord is crying out "Return! Return!" to the backslidden children who have found their pleasures elsewhere. He is calling to the redeemed who have lost their way and whose hearts have grown cold. He is ready to "wow" them with a revelation of His heart that will cause true holiness to spring up like a geyser from within their spirits.

The End-Times Revelation of the Bridegroom God

God has reserved this revelation for the generation in which His Son returns. This statement, "I am married to you," was rare in the Old Testament. Hosea spoke of it a little bit and Isaiah touched it a few times, but God only gave them whispers. There have been mere hints of it through church history, and few preachers have focused on this spiritual reality for very long. And never in history has the company of the redeemed fully understood that they are the cherished bride. But in the last generation, the Holy Spirit will emphasize it with intensity. The knowledge that Jesus is a Bridegroom and we are His bride will crescendo and become a divine shout as we move toward the moment when the Spirit and the bride cry, "Come!" The Holy Spirit will emphasize the message of being married to the Lord with power in churches and gatherings of believers in every country. He will single out this message for its singular importance at this hour in time. As the message seizes the hearts of the hearers, the body of Christ will change dramatically in the way it approaches God. Church life, relationships, ministries and outreaches will look different than they ever have. For the only time in history, the people of God across the Earth will see themselves as a bride and Jesus as their eternal Bridegroom.

One of the greatest and most baffling truths about our eternal destiny is that God has ordained that He will share His heart with human beings. This bridal identity, this privileged position of intimate nearness to God's heart, far surpasses positions given to the angelic order and all the heavenly host. Our position is one of almost unimaginable spiritual privilege. The God of the universe opens His heart and shares the deep things of His being with us - that's more than staggering! I imagine an ancient boundary line that keeps the angels standing as servants at a distance from the heart of God. They are only allowed to approach to a certain point and then they must stop. Yet the Lord Himself invites weak human beings to cross that ancient boundary line. He beckons us to come near. He gives to us what He keeps hidden from angels.

What does it mean to be married to the Lord? We begin by recognizing that He is a passionate Bridegroom. That leads us to understand that we are His prized bride. Our identity flows from Him. We cannot understand ourselves as a cherished bride until we know what our Husband is like. If we perceive God as angry and disappointed, how can we enter into our true identity? We'll have an inaccurate, distorted portrait of ourselves.

Modern and "pop" psychology, which is pervasive in the world and even in the church, emphasizes self-discovery, or, "Discovering who I really am." This is an important thing to do, but it's out of sequence. The answer doesn't lie within yourself or your surroundings or your past. You will never discover "who you are" by examining your environment, your job, your family history, or the people you know. The secret to who you are lies in the heart of One Man alone. He is the Bridegroom God. Only by gazing in His eyes and understanding who He is will you know who you are. All other searching is in vain.

How many hours, years and lifetimes have been wasted as people gazed at their own hearts and came up empty? How many good people have fallen for theories and philosophies that put self-discovery at the top of the totem pole, only to leave them with no clue who they really are? The answer is in the other direction. We shouldn't concern ourselves at the beginning of the journey with finding out who we are. That will come in time. God will reveal you to you in a deeply meaningful, life-transforming way. But, like John the Baptist, we need to first discover who Jesus is as a Bridegroom and to feed our spirits on what His personality is like. When that knowledge begins to come alive in your mind and spirit, you will inevitably discover His affections, His desires and His tender dealings with you in your weaknesses. You will see that you are indeed a cherished bride. The real you will emerge and blossom in light of who He is.

Just As Powerful For The Hearts of Men

In other words, the message of the Bride of Christ is God inviting us to experience intimacy with the deep things of His heart. "Eye has not seen, nor ear heard, nor have entered into the heart of man the things which God has prepared for those who love Him." But God has revealed them to us through His Spirit. For the Spirit searches all things, yes, the deep things of God (1 Cor. 2:9-12).

The deep things of God's heart speak of His fiery emotions for us. The Holy Spirit desires to reveal these to us. This reality about God's heart is beyond anything that we have ever imagined. The fullness of this has not even entered the human heart. This is the way to live a fascinated life as a lovesick worshipper. Intimacy with God is not just an option but it is the very essence of true Christianity. Men of God, this message does not undermine your masculinity, it actually establishes it and gives you the way into your full manhood. Consider how the Bible describes King David, John the Baptist, and the Apostle John. These were "real men." Each one would have been known in his day as a "man's man." They were men who pressed into the privilege of experiencing the deep things of God's heart.

We get too hung up on the gender issue. Remember that King David was known as the great warrior king. However, he was the example of the lovesick worshipper of God. Was he any less a man? John the Baptist, the fiery prophet in the wilderness, referred to himself as a friend of the Bridegroom (Jn. 3:29). Did that make him a sissy? John the apostle, the son of thunder, identified himself as the one that laid his head upon the Lord's breast (Jn. 21:20). Did that sabotage his manhood? No. These men discovered the path to true intimacy, which is the privilege of both men and women in the body of Christ.

Your position before God as the bride of Christ brings you into connection with the deep things of His heart. Being married to the Lord is the greatest conceivable honor in the entire universe, for men and women.

One Thing is Needful


Take time to build your relationship with God on our musical Prayer Journey:

Invite Him to be with you

Worship and adore Him

Become conscious of His Presence


Set your heart on Him alone 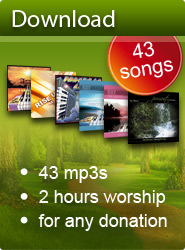 To listen to music, order CDs or download albums, visit our Online Store

Individual mp3s are available for download from the iTunes store.
iTunes 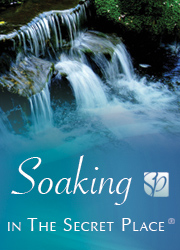